The Custody of the Holy Land, with own and EU funds, and in Partnership with UN-Habitat, is implementing a comprehensive rehabilitation Project in Dar Al Consul civic and residential complex, which is one of the Custody properties in the heart of the Old City of Jerusalem. The complex, which corresponds to a urban block of relevant dimensions (80 x 50 m x 5 levels above and below the ground) and intersects the Roman Cardo, consists of 40 Houses and a basement floor used as a closed storage at the street level, besides sharing part of its ground floor with the old city market.

Prior to the planned rehabilitation works in the houses – to improve the living conditions – and in the basement – to be reused as public space – the Custody intended to conduct a safety assessment of the complex for both static and seismic loads, in order to integrate any needed strengthening work within the planned restoration activities. Several modelling strategies of the structures, which resulted particularly complex for the historical stratification of the site, were then used.

By means of numerical modelling, the stresses were defined in the masonry elements by weight and by occurrence of a seismic event, allowing to highlight the insufficient safety conditions of the main resisting elements of the basement and subsequently to define adequate structural consolidation strategies. 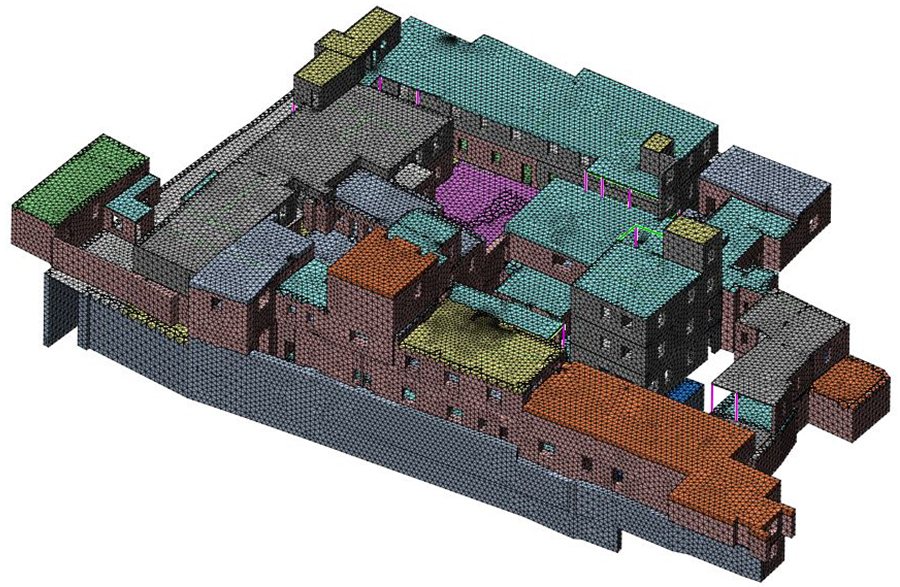